We had a lot of Ethiopian coffee yesterday. First we went to Tomoca, which is a very popular roaster and café in the Churchill area of Addis. It is in the Italian style; a tiny space crowded with Ethiopians quickly downing shots of espresso. They also do a brisk business in bagged coffee to take home (which we participated in). Did you know that Ethiopia was occupied by Italy under Mussolini? This explains the italian influence in such things as ‘Ciao!’ which we hear all over, including from crowds of children when we depart the orphanage. One has to wonder also, if Ethiopia influenced Italy with coffee. Did Italians drink coffee prior to the occupation? Perhaps Ethiopia introduced it and Italy developed it into the espresso we enjoy today.

We were not satisfied with our experience at Tomoca…it was a little too much like being at Bar Italia, my favorite espresso bar in London. We wanted something a little more authentically Ethiopian, so we asked our driver for a suggestion. He took us a little deeper into the downtown area, and told us to be careful as he dropped us in front of a tiny storefront. ‘You go inside!’ he gestured. So we did. It was so tiny, Charles and I barely fit, but the group of coffee patrons inside seemed welcoming enough, and a woman wiped off one of the tiny tables and offered us a seat. The traditional clay coffeepot was on a tiny coal fire, and the patrons waited patiently. There were ridiculous plastic pitchers of (probably) tap water on every table, which really detracted from the otherwise earthy, Ethiopian look of the place. 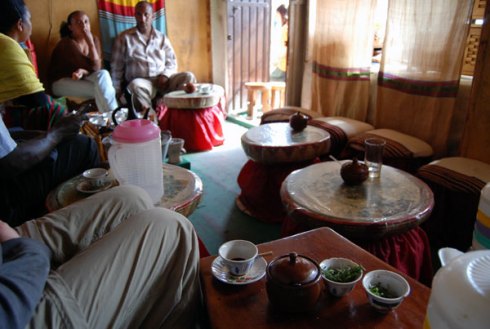 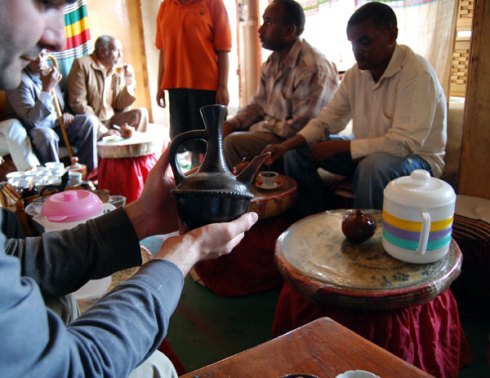 traditional Ethiopian coffee pot (not the one that was just on the coals!)

When they pour the coffee, which is as thick as syrup, the grounds stay in the base due to the design of the pot. On each table were little cups of small green leaves, and I wondered aloud what they were. Two of the gentlemen there spoke a little English, and they were excited to explain that the herb was to be dropped into the cup of coffee. The Amharic name is “Ten Adaam,” one of them wrote it down for us. I must find out what herb this is…it transformed the flavor of the coffee in an inexplicable way. Maybe it’s a drug?

Here is a shot of Charles in the café so you can really get a sense of how small it was. 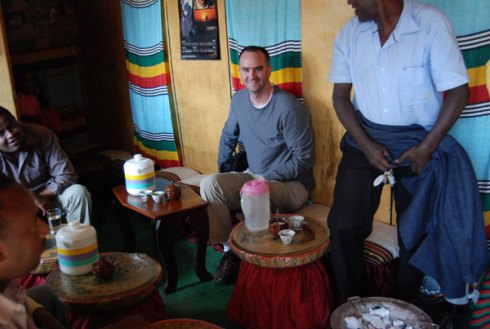 After loading up on a lot of caffeine (yes, I’m back on the juice!), we asked Dawit, our taxi driver, to drive us through the Mercado. We didn’t really want to shop there or get out, we just wanted to see it. So like a bunch of cowards, we stayed in the car and shot photos through the window. Apparently if you open the windows you are at great risk of having your camera or anything else on your person swiped. Dawit wasn’t crazy about even going to the Mercado, but he agreed to it. He noted that it was very empty yesterday, and that normally it was nearly impossible to move a vehicle around the 4-kilometer area. Particularly on Sundays. It was fun to see the donkeys, the big bags of dried peppers being loaded on trucks, the structural steel for sale in the industrial area. Dawit told us that 90% of the merchants are Muslim, and he and his friends don’t ever shop there. 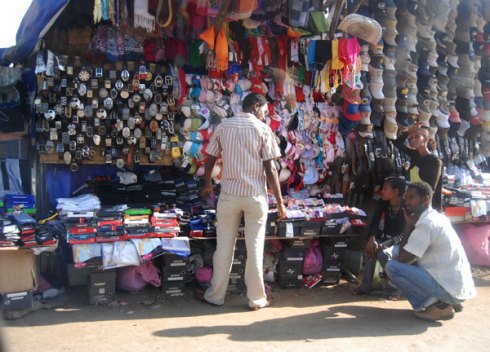 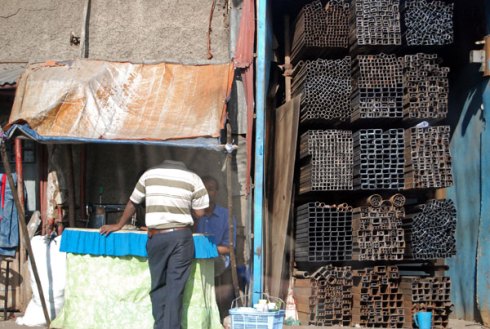 in many places hot peppers like these are out on the street on tarps, either being dried, or for sale

baby on board...looking like a cocoon! Also the bananas here have way more flavor than at home.

little girl getting her hair fixed on the sidewalk 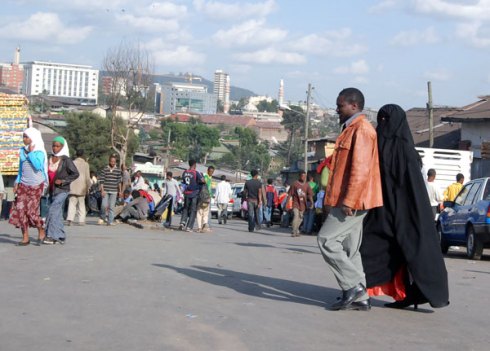 We stopped back at Layla afterward to visit the kids, and to measure the boys so we can understand what size clothing and shoes they wear. They LOVED being measured, and enjoyed playing with the little retractable tape measure we brought. From a couple of the older boys we learned how to ask “How did you sleep last night?” “Andit Tah Anyak?” and “Come here” “Naha zee” (this might be helpful for Melkam!). Zenew gave us some letters to mail to his mother back in Michigan and enjoyed being the star of some of the video footage Charles was shooting.

Before we left, we took the brothers to say hello to their baby sister Tarike. She was being changed when I went in to fetch her, and I watched the nanny liberally apply zinc diaper rash ointment from her belly to her knees. Wow, she should be good for a while! I think we have settled on Tarike’s new name: Eliana, which means “God answers.” We told the boys through our 9-year old translator, and they began repeating her name over and over throughout the courtyard. We came to Ethiopia with this name in mind for her, but felt we wanted to get to know her first before making the decision. It really seems to suit her; we will likely call her Ellie.

The boys will keep their names, but interestingly, while Alex insists his name is Alex and that’s what’s on his paperwork, everyone there calls him Elias (pronounced Eh-li-ahs). We’re not sure we understand this…must ask the social workers what the story is.

Today we have an appearance with the judge!

Here are a few more scenes from around the city yesterday: 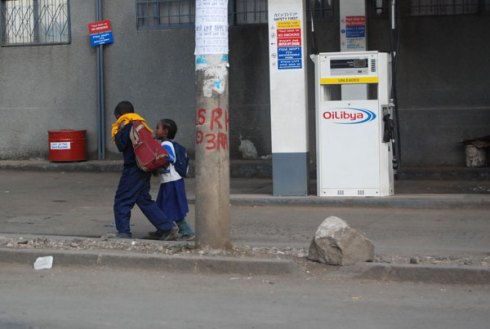 See where your petrol comes from when you don't have an embargo with Libya? 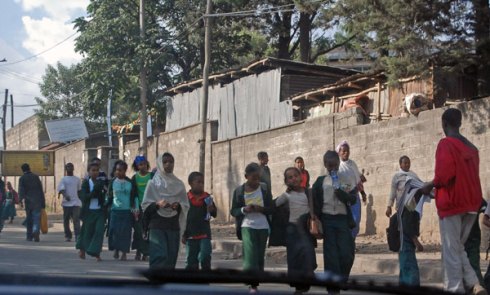 schoolchildren walking home in the afternoon

I was enchanted with the numbers painted on the stalls like this: 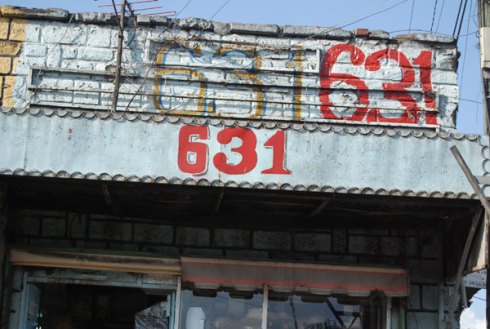 This entry was posted on Wednesday, November 24th, 2010 at 9:32 am and posted in Uncategorized. You can follow any responses to this entry through the RSS 2.0 feed.
« Bethezata Children’s Home
Court! And thoughts on international adoption »

6 responses to “Coffee and Mercado”