It seems that one too many sick babies coughed on me in the first couple of days of our visit, and I’ve got a cold. Yesterday we visited a pharmacia and picked up something like Sudafed for a very reasonable price. The maker is a recognizable drug company and we’ve heard that general medications here are quite trustworthy. But as a result, we’ve been taking it easy.

In the last two days we’ve had dinner with another adopting couple in two great places that I’ll recommend for anyone traveling soon: Goti Thai (off the beaten path, but really excellent food) and Jewel of India (highly recommended by lots of AAI families). We had Indian for Thanksgiving and it was great!

It has continued to rain off and on and the temps have been cooler. The rain has made walking more of a chore: slippery sidewalks, puddles to navigate, and lots of garbage and mud mixed together along the edges of the roads. The sewers here drain into the nearest body of water, apparently unfiltered, so the river that runs through parts of the city looks so sad, and smells terrible.

Not a very healthy river ecosystem

We also learned that the awful smell along the streets that I mentioned in an earlier post is from a large open hole, about the size of an American manhole cover. It’s the local dumping site for home latrines. Typically the small homes have a bucket for this purpose, and they periodically carry it to this hole, at which point it drains to the river. Not much more to say on that topic!

Although I’ve wanted to, I’ve avoided taking photos of people on the street out of respect for them. However, I really wanted to show you this Ethiopian form of tetherball that we’ve seen in many places, and these boys were pleased to be photographed. A ball, which is usually tied up rags, or a bag of who knows what, is tied to a lightpost. Rather than hitting it with their hands as it spins around the pole, they kick it (as they say, everything in Ethiopia becomes a soccer ball), often kicking each other in the process. It is an impressive piece of ingenuity, this game made out of nothing! 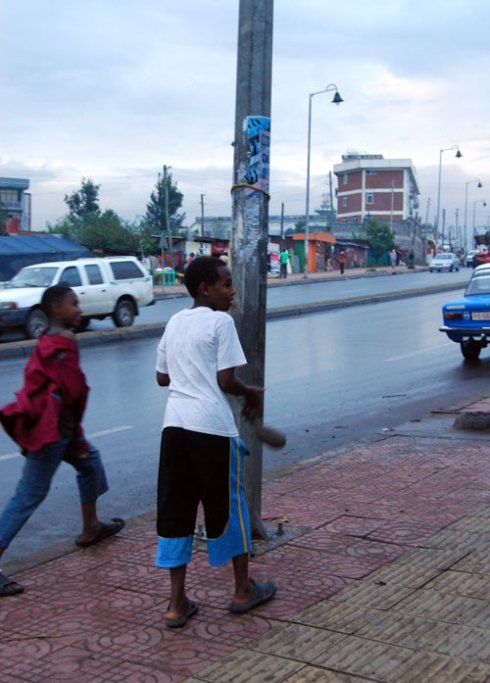 The children make toys of whatever they find. At the orphanage they play serious, aggressive soccer on a concrete court wearing broken flipflops. The maneuvers are awesome to watch!  On part of our walk through a small village yesterday, five children playing soccer with a half-deflated and aging ball made a point of telling us what a ‘good ball’ they had. Then they asked for candy.

Here is a group of typical dwellings with dung-covered walls. These have a nice grassy area where there are a few sheep and some chickens. When we passed, this man looked like he was contemplating which chicken to prepare for dinner. 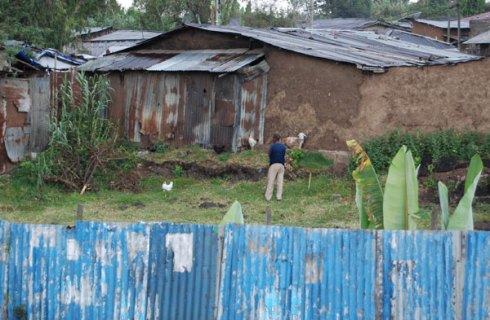 Typical Ethiopian dwellings in the city of Addis Ababa, and the ever-present corrugated metal

We spent part of yesterday trying in vain to find reasonable prices on flights to Lalibela, where the ancient stone churches are in the northern part of the country. We could find nothing for less than $360/person, and as that is just not in the budget, we will satisfy ourselves with a visit to the few 12th century examples found right here in Addis. We’ll have an outing to see those tomorrow, along with the former palaces of Menelek and Haille Selassie.

Today we joined new friends for a simple traditional lunch at the Ritmo Guest House, where many AAI families stay. They had a cousin and her friends visiting from a village South of Addis. Two of the women were nurses and one a teacher in an orphanage there…all staying for at least a year. I was so inspired by them. They eat injera every day and deal with the lack of water, power, cleanliness, etc. every day! I must admit I can’t wait to get home and take a shower without worrying about the water getting in my mouth, for example. Life is hard here, and these young women are having an experience that will impact who they are forever.

I thought you might like to see where we walk every day, sometimes multiple times, between the Kings Hotel and Layla house: 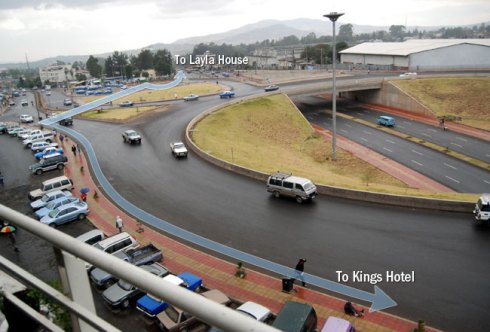 Our daily path back and forth

The railing from which I shot this photo is on the 3rd floor of the Adams Pavilion, on the balcony of the Garden Paradise restaurant. The highway traffic circle is unusually modern for the area, and was just completed two years ago. Herds of sheep are regularly driven through the streets of this circle, and sometimes are grazed on the grass in the medians. Yesterday I saw a man with an overloaded wheelbarrow walking through the traffic. In this photo it is pretty empty, but at times the sidewalks and the road are packed. Lately in the evenings we’ve seen a woman on the sidewalk with a portable deep fryer making and selling french fries.

We are on our way back to the hotel for the evening after an exhausting 3-hour visit at Layla. We split our time between the baby room and the outdoor courtyards so we could see all the kids. The other children are now comfortable enough with us that they compete for our attention, but it is friendly competition and we are the winners, with so many beautiful faces smiling at us, climbing in our laps, singing the ABC’s at the top of their lungs to impress us. It’s hard not to pick out kids for your friends! As we get to know them I find myself thinking about which ones would fit in with which families 🙂 Don’t worry, I won’t start promoting them to you, but if anyone is considering, just let me know!

Hope everyone had a wonderful Thanksgiving! We feel overwhelmed with all that we are thankful for this year.

This entry was posted on Friday, November 26th, 2010 at 3:32 pm and posted in Uncategorized. You can follow any responses to this entry through the RSS 2.0 feed.
« Court! And thoughts on international adoption
Silk Factory and Museum »

One response to “Under the Weather”