I have a rare quiet moment while all three kids are napping, so thought I’d give a quick update on the family.

Alex has a new watch from Grandpa, which he puts on every morning and refers to throughout the day. It’s not digital, and he’s learning to tell time. He loves numbers. Grandpa also thought Alex didn’t need training wheels on his bike, so he took them off and worked with him for an hour or so to get him going. Then Grandpa went home! So we’ve been getting a LOT of exercise running along encouraging Alex.  (thanks Grandpa!) I’m happy to say that about two hours ago he rode almost all the way around the block without any intervention from Daddy. He is VERY proud of himself, and we are of course proud of him too!

Melkam still thinks it’s great that he can beat his big brother back to the garage since he’s riding a tiny bike with training wheels and needs no help. The two of them are very competitive. I’m quite sure they are taunting each other most of the time, but we can’t tell what they are saying. Melkam gets frustrated regularly by his bossy big brother, and the dark version of Melkam is fun for NO ONE. He’s a screamer. in fact, all three of them are. Our once-quiet home is no longer! Melkam has been working through some things this past week. Fits of rage with plenty of screaming and tears. This can be triggered by getting the news that he can’t go outside unless he wears a jacket, for example. At the same time, he has an incredible attention span for certain things. He’s very creative, loves to color and paint, and really loves music.

Eliana is not the space cadet we were seeing in most of the photos from Ethiopia. She is a funny, loud, active baby who LOVES to eat. She’s a mama’s girl, but she’s gone to the nursery at church twice now and seemed very content to play with the other little ones. She also is willing to go to another woman on occasion, and grew to REALLY like her Nana (my mom) during the few days they were here. She’s gotten more content with her Daddy too, but still generally is wary of all other men. Eliana is going to have a big personality! 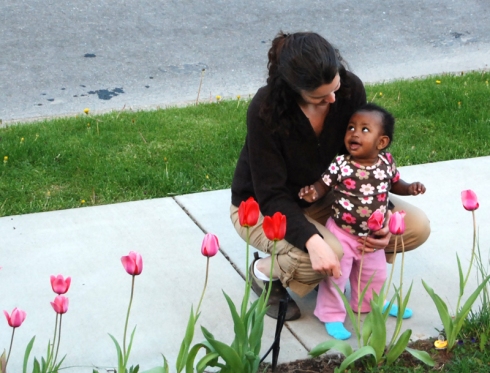 All the kids made big improvements in week two in terms of their communication skills, their general comfort with their surroundings, and with us as their parents. We have had glimpses of what ‘normal’ might look like in the next few months, and it’s a great image. In the meantime, we are still going through challenging things like medical testing, treating existing minor medical issues, and generally helping the kids understand where the boundaries are in our family.

I do have to report a really lovely breakthrough: When we ask either of the boys if they want a hug (for example when saying goodnight), about 60 percent of the time they say yes. This is awesome, as both have been mistrusting of us and generally aloof in terms of physical affection. We are seeing lots of signs that they’d like more affection but aren’t quite comfortable yet. We are patiently waiting until the day that we all feel that comfortable together…and I really believe it’s not that far off!

This entry was posted on Tuesday, May 31st, 2011 at 3:44 pm and posted in Uncategorized. You can follow any responses to this entry through the RSS 2.0 feed.
« Family, six days old
The Straight Poop »

One response to “The Two Week Report”