Photos first, then if you are still interested you can read on!

Alex is doing incredibly well on his big bike, and he LOVES it!

Last weekend we all went out on the boat together (including our dog Noah)! I took almost no photos because there was too much to manage. Here are the boys emptying a container of salsa with chips. 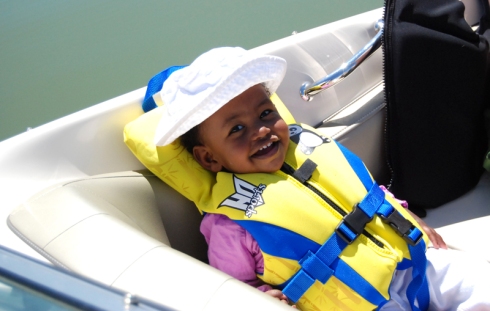 By the way, Melkam is going through a phase of not wanting his photo taken; don’t think he’s purposefully under-represented!

This is going to sound so mundane, but I must share it. We’re struggling with discipline because we want to give the kids leeway as they work on understanding English. At the same time, there are things they do that are either dangerous or impossible to live with that must be curbed, and to the extent that it seems they understand, it’s time to dole out consequences where appropriate or we’ll never regain the reigns of this horse.

Remember, if you are adopting siblings they come with the mixed blessing of each other. On the positive side, they retain some of their culture (both nationally and personally) because they can share a private language and all of their inside jokes and memories. On the negative side, they retain the behavior they’re used to because they have each other. If either of our boys were solo in a new family I doubt they’d cling to some of the things we’re seeing quite as much.

Our kids chatter, bicker and sing in Amharic all day long, and it’s awesome. They are not chatty in the presence of new people, who they meet constantly and who want desperately to engage them. When that happens they clam up, although they are starting to be more open with shaking hands and saying hello with a smile. Sometimes they are so rude, and their charming “just arrived in America” bit will only be an excuse for so long. How long do you think? At what point in their life here will it be acceptable for them to snarl, toss a shoulder and remark “Impe!” at someone who reaches out to shake their hand? These are the tough questions to answer. Especially when we hear them and see them at home reciting “Hello, so nice to meet you!” during play at home.

So today Mommy dropped the hammer (not related to interacting with people, we’ll work on that soon). We’d driven to a place this morning where the kids could safely ride their bikes while I walked the dog with the baby in the Ergo. They had a lovely time, in fact we all did. We’d been working on understanding the difference between ‘loud’ and ‘quiet’ all morning. We had to run some errands earlier, like another trip to the lab at the hospital to drop off more samples (yay, done with poo collection!!!), and before we go in I remind them that when we go into a place of business like this that we are quiet. They repeat ‘quiet’, and put their finger to their lips and say ‘Shhhhh!’ And I say, yes, that’s very good! No problem, they were great on the brief trip in and out.

Well they tend to really get going sometimes, teasing each other, and their volume level is way out of the comfortable range for anyone nearby. For this reason we try to get lots of outside time in places where they can yell and scream. So we’re in the car returning from this little bike ride. I’ve asked the boys to quiet down in the car and I know they understand what I’m saying. Finally it escalates higher and I very clearly tell them that they’re being too loud, that they need to be more quiet in the car. Melkam defiantly starts shreaking. Boy that kid can belt it out!

I turn to him and tell him that’s it, no Sakee (bicycle) at the park today. He gets quiet and I don’t mention it again.

I just calmly remove his bike from the back of the car when we get ready to go meet our friends at the park. Alex asks “no sakee?”

I tell them “Melkamu no sakee” because he didn’t listen to Mommy about being quiet in the car (this is all accompanied by pantomimes of things I know they understand). Well, Melkam unleashed his fury on me when we got to the park. He refused to leave the parking lot. I had to carry him beyond the dangerous car area with him kicking and screaming. As soon as I released him he headed back for the parking lot. I think we did this twice as I explained to him that he had to stay where Mommy could see him. I got LOTS of foreign commentary and Melkam’s worst mean faces! He finally did comply by staying just inside the entrance sign to the park, but do you know although he finally stopped screaming after 30 or 45 minutes, he still refused to play, refused food, anything that had to do with the offending party: me. I had people walking past him at the entrance thinking he was a lost kid crying for his mother. No, he’s fine, just not happy with Mommy right now. I had other children ask me over and over again “what’s wrong with him?” Each time I’d explain that he was frustrated because he was naughty and so didn’t get to have his bike at the park and he was mad. Then I’d ask them if they ever felt like that and every time I got a sober nodding of the head. That was actually pretty cute.

After about an hour one of his friends rode over on a scooter that Melkam loves and offered it to him. For over an hour he remained in his own misery although I told him he could play, could swing (his other favorite thing), and invited him to eat lunch with the group. Any activity that I was involved with, he wanted no part of.

The good news is, we were there for over two (long, arduous) hours, and in the end he caved and ate what I offered him and even asked me to push him on the swing. He was relatively happy the rest of the day. I just hope this has a positive impact on whether or not he listens to anything I say in the future.

Both boys are showing a serious lack of respect for what Mommy says vs. what Daddy says. This is partly cultural and we expected it, but Daddy is also physically a lot more capable of backing up his requests (it’s easy for him to physically carry Alex to his room, for example for a time out). I do it, but dude, I am SORE from three weeks of parenting three very physical kids!

So I know that was risky, sharing a parenting story like that. Not everyone will agree with my decisions, I get that. But if you can relate, I can use all the encouragement I can get! Also, it might be helpful for someone else out there to know about the wailing that our kids do as part of their rage and grieving process. It’s not easy to get used to, but I was so grateful to learn that other Ethiopian kids home at their age have the same habit. It’s just part of the package.

This entry was posted on Tuesday, June 7th, 2011 at 10:18 am and posted in Uncategorized. You can follow any responses to this entry through the RSS 2.0 feed.
« On Food and Eating
Our Little Firecracker »

10 responses to “Mommy drops the hammer”