Next week we celebrate three months home with our three kids from Ethiopia! I can’t believe it, and then again in some ways it feels like it’s been a year.I’m tired and this is going to be string of consciousness, but a post nonetheless! Here’s a photo of the boys trying their best to finish orange popsicles on the beach before they completely melted, and feeling quite delighted at how the popsicle changed the color of their tongues. 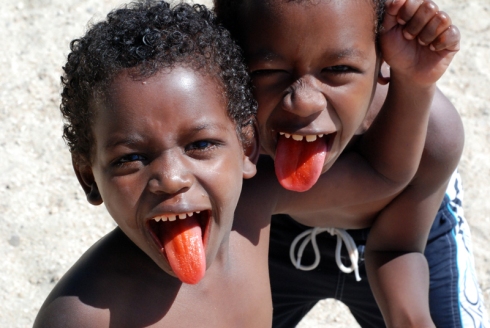 Here’s Eliana just after she dumped a box of cheerios on the floor and was shocked and dismayed at how quickly I plopped her into the johnny jump-up so I could pick up the mess before she stomped on them all. I should title this photo ‘missed opportunity’ or ‘incomplete mission.’

Yes, this photo reveals TWO neglect-o-matics in close proximity; an exersaucer and a johnny jump up (don’t judge!). While she is not neglected, nor often relegated to either prison cell, I am so thankful I have a way to keep her safe in those moments when I have to deal with something else (like a screaming brother, a pile of cheerios, a boiling pot, etc.) This child is into EVERYTHING and has recently started running, which means she’s also frequently falling down and crying, or smashing her fingers in something, or emptying any bag, box or drawer she can get her hands on. I’ve had to tell the boys not to pull her up onto the couch because although she asks innocently enough (“up?” with arms upstretched and a hopeful look) she has every intention of climbing over the back and landing on her head on the hardwood floor. She keeps us on our toes but we love her to death! Just this week she started offering her sweet little face when I say “Can Momma have a kiss?” Oh, she is such a little nugget!

Eliana now clearly says Daddy (frequently), Mommy (rarely), Up, Wawa (for our dog Noah and all other dogs), hand (as in, hold my hand), and she’s trying to say all sorts of other things like ‘shoe,’ and ‘water.’ She signs for ‘more’ which comes in very handy for someone who is so obsessed with food.

We are now having conversations with the kids, especially Alex. Yes they are halting conversations with lots of pantomime, but he’s pretty amazing at both understanding and conveying complicated ideas. Such as asking me what would happen if you jumped out of an airplane window (and then his eyes glaze over as I say something like ‘well the cabin is pressurized so…’). Or, if you were riding your bike and you got in an accident, got hit by a car, and the police came to help you and they took you to the hospital what would happen to your bike? (I loved that question!)

I told him the police would make sure your bike got back to you. He liked that and noted that the police are very good. We’ve had conversations about police before, and I get the distinct impression that there’s a lot of corruption in Ethiopia. I tried to explain to him today that when the police are bad, the whole system doesn’t work, so it’s very important to us here in America that the police are honest and fair. Wonder if that’s going to come back to bite me someday! My intent is for him not to be afraid of the police, but to help the kids understand that when a cop tells you to do something, you do it. Like when Mommy got pulled over for going 83 miles per hour and the cop gave Mommy a ticket. We had lots of conversations about what was going to happen to Mommy after that! Alex was very relieved to learn that when I paid the fine I’d be on good terms with the police. Or as Alex put it “Police: Mommy good job?” Yes Alex, Police: Mommy good job. Alex told us that in Ethiopia sometimes the police just throw you in jail.

So after our discussion today, Alex proceeded to tell me that his birth father had a friend who was police. He tends to swap military and police terms, so we are not sure which he means in a case like this. He told me that one day the police were very tired and his friend came to his father for help and his father went to help the police.

He also told me today, prompted by the petting zoo we visited on Sunday, that his birth mother once paid for him to get to ride on a llama’s back. I asked if Melkam got to ride too and he said yes, with his mother, but Alex got to ride alone.

Yesterday Alex asked me “In America, what bites?” Well, one could answer that question in many ways, but I happened to know from a flurry of similar questions that they want a clear list of which insects and animals bite, and which don’t. Alex had been afraid of the harmless Mayflies that bombard our area during July and August, and finally trusted me when I told him they don’t bite or sting (and repeatedly caught and held mayflies in my hand to prove it). He then promptly adopted one that he insisted I carry in the bike trailer and tried to convince me to feed. Thankfully it flew away at the playground.

Tonight the boys and I reminisced about our time in Ethiopia and our trip home. It was amazing the details they remembered, and it was a really beautiful quiet time together to be able to talk about it. It all started when Melkam was playing with this little toy dog that was passed on to us by another family. It looks like this: 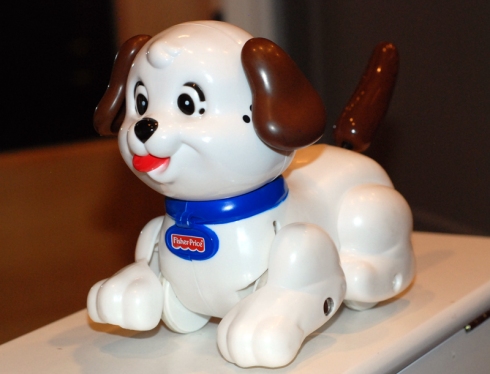 They had almost an identical toy at the orphanage, albeit filthier, and the first day I met them, Melkam began pulling this toy by its string back and forth in front of the TV where 20 other kids were watching a film. He was oblivious to the fact that he was blocking the view (and strangely none of the other kids complained either), slowly pulling this toy back and forth and checking in with me to see if I was watching. Then he moved on to rolling a small ball or marble across the room to his friend Hamdi who would roll it back. They he finally came over to visit me and produced a jack out of his pocket and showed me how he could spin it on the tabletop.

We talked about this tonight and he remembered all of that, adding in details where I missed them. They both asked me where we went when we left Ethiopia, and why it took so long for us to come back. Oh, my sweet boys!

They remembered our friends (who they now know very well), who picked us up at the airport when we arrived home, and wanted to know where their kids were. I told him we couldn’t all fit in the car together, and Alex clarified that he wanted to know who took care of their kids while they came to pick us up! He recalled how very tired he was on the flights home, and that he was a little scared and that the airplane was very loud. He then got a grin on his face and said “I like chair buttons!” referring to all the controls on his seat that allowed him to select movies and recline his seat.

We not only survived that rigorous travel experience, but we’ve almost survived our first quarter as parents. We continue to be so grateful for this amazing adventure, and prayerful for the strength and stamina to parent these kids to the best of our abilities without completely losing it in the process.

Here are some of the ways I’ve changed in the last three months:

I like Ethiopian food and know how to cook some of it, my arms are stronger, I’m utterly exhausted most of the time, I swing (at the playground…don’t get any ideas) at least twice a week, I use the ‘car cart’ at the grocery store and it’s fully loaded with kids, I say things like “Do not bite your brother!” and “Did you wash your bum yet?” I value a spare quiet moment more than I ever have in my life, I have a whole new appreciation for my washing machine and I spend time with it almost daily, I value my mom friends in ways I don’t think I could ever adequately express, I’m less spontaneous with my schedule and saddened by that loss, I’m more surrendered to God than ever before.

This entry was posted on Tuesday, August 9th, 2011 at 10:28 pm and tagged with Ethiopian Adoption and posted in Uncategorized. You can follow any responses to this entry through the RSS 2.0 feed.
« I think we’ll keep them
“Be Careful Mom, Don’t Be Fat!” and a chicken update… »