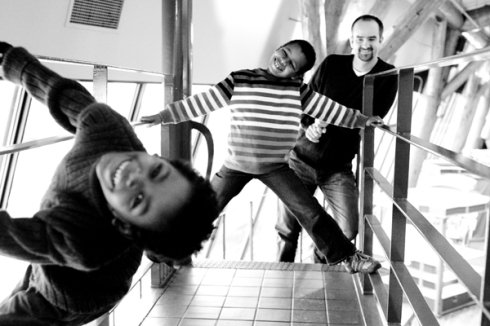 As I write these words, I fear I shall regret them all too soon: We have not had any vomiting since the kids came home. Not a single incident, projectile or otherwise! Nor have we had much in the way of explosive diarrhea. Our battle with Giardia was over within six weeks of coming home, and the kids have been generally healthy. We’ve been very, very fortunate. I’m doing my best to not take that for granted!

Written Last Week and never published: Alex has a terrible cold this week and spent yesterday dozing on the couch and looking bewildered. He has rarely been sick and he didn’t know what to do with  himself. I’ve been up off and on the past few nights as he’s come in complaining of various aspects of his illness, but this morning was unique in that he woke me up at 5am with bloody nose. A real gusher. While I was sitting with him helping to get it stopped, I told him the story of the worst nosebleed I’ve ever had, which was in Ethiopia in the guest house in May after we’d picked up the kids. Due to scarcity of paper products, I was using a damp washcloth trying to stem the torrent of blood that was splashing all over the sink. All I could think about was how I was letting contaminated water come into contact with my nose and mouth. It took about and hour and a half to get it stopped! I kept trying to yell for my husband, but all that came out was gurgling sounds. It was a nightmare! Alex’s nosebleed was under control after 20 minutes or so and he was able to go back to sleep.

This Week: Alex is all well! He’s enjoying basketball and school. Tonight he thought highly enough of me to share with me his ‘secret knuckles’ handshake that he has with two of his friends at school. I was honored! We have ongoing struggles with Alex’s attitude, which can turn South with the flip of a switch, but we are learning ways to cope and to help him recover when that happens. Therapy is VERY HELPFUL. Seek it BEFORE CRISIS!

Written Last Week: Eliana is teething her big 2-yr molars and also has a cold, although not as severe as Alex’s. She’s generally grumpy and needy. And Melkam spent the day off yesterday telling our nanny how much he “doesn’t like this.” He’s used to having a dynamic older brother lead him in play and he wandered around a lot and said “I don’t know what is fun!” and then turned down every fabulous idea I offered for fun things to do.

This Week: If you need to lighten up, move a toddler into your house. Eliana is hilarious, sweet, impossible, and non-stop work combined with non-stop joy. There are not enough words! And regarding Melkam’s boredom and general malaise, it occurred to me (with the help of a talk last week by Foster Cline of Love and Logic fame…YES he LIVES here!) that I don’t have to sit down and come up with fabulous ideas for Melkam when he’s bored. What a revelation! I can just say, “That’s too bad! What are you going to do about that?” and let him own the problem, thus learning how to entertain himself. I don’t have to rescue him from his perception of boredom. I’m liberated! Try it!

Another milestone recently: The boys are comfortable enough now to share their negative opinions about our home and family. Hooray! A great attachment milestone! Now I get to hear regularly “I like Amhara better than this house!” Alex doesn’t tell us why, but enjoys being able to share this opinion. Melkam is very clear about the reason: “Because in Amhara we watch scary movies every time!” A therapist expanded on it recently and said to Alex, “It sounds like in Amhara you had fewer rules, and here you have to follow rules. Is that why you liked it better there?” Alex wouldn’t speak or make eye contact, but he nodded rather enthusiastically. It’s tough for the boys to adjust to a loving family that also has rules and expectations. They are doing a great job though!

I continue to hunger for more memories from Alex in particular, but work hard to not press. It’s his story, and he’ll tell it when and if he’s ready. When the topic comes up organically he’s open with details, but we try to let him bring it up. I try not to let it be important to me, but I’m dying to know everything I can about all that time I wasn’t with my children as they were going through life. I do envision someday being able to connect with their other family members and take the kids back to visit their village in a few years when they are more secure.

I’d say the biggest battles right now are our continuing attachment journey with all three children, our (the parents) work to have the healthiest marriage possible in the aftermath of this enormous transition, and dealing with Eliana’s Sensory Issues. I capitalized that because this is a very common topic with adoptive families and it manifests itself in different ways (and is called by different names). I am a total newbie to the idea, and am learning from our occupational therapist and others as we go along. Ellie doesn’t suffer from the full spectrum of symptoms involved with Sensory Processing Disorder (formerly known as Sensory Integration Dysfunction), but she has some unique areas that we are trying to help her with. We began work with an occupational therapist because Eliana seemed to not have any awareness of her tongue, which was usually hanging forward out of her open mouth (often also referred to as ‘tongue thrusting’).

The tips from the occupational therapist have been easy to integrate and we are already seeing significant improvement. But a month or so ago she started something new: Slamming her head against the end of her crib. Hard. Over and over again. At first I thought she was bouncing her legs against the mattress, as she has done off and on since we first picked her up. But when we were sleeping in her room over Christmas it woke me up. I went over to soothe her and realized with horror what she was doing. She seems to do this ‘head banging’ as we call it, most when she is semi-asleep…in the transition either from wake to sleep or sleep to waking. On her tummy, bum in the air, rhythmically ramming the top of her head against the end of her crib. Often if we move her back to the middle of the mattress and rub her back or her head she doesn’t even wake up.

It’s gotten worse since I first began writing this post last week, and it is a bizarrely maddening problem! How do you convince a not-quite-2-year-old to stop a repetitive behavior like this? We have only a thin bumper on her crib, and would rather curb the behavior than bolster the edges of the crib with more foam, but our tactics so far don’t seem to be working. Over the weekend we tried putting her to sleep in her pack-n-play, which has cloth sides. Nothing to slam against. This is offering US some relief from the disturbing sound and the mental anguish (ours, not hers), but I doubt it’s doing much to stop her from the behavior when she goes back in her crib. Sigh. We were supposed to have a meeting with her OT today, but she is sick and had to reschedule for next week. I’m really hoping we can find a way to help Eliana meet her sensory needs before bed so she can stop taking it out on her poor little head. In the meantime, she may be sleeping in the pack-n-play until further notice.

This entry was posted on Tuesday, January 24th, 2012 at 9:21 pm and posted in Uncategorized. You can follow any responses to this entry through the RSS 2.0 feed.
« Flexibility
Walking Hand in Hand »